The CCA negotiation team last provided a report on negotiations on October 27, 2015. A copy of that report can be found below.

On October 27, 2015, the CCA team and the Local 1021 team held a scheduled negotiation session. The two negotiating teams nearly completed their joint discussion of Local 1021’s contract proposal that was first presented by the union on August 19, 2015.

Also at the October 27 meeting, by mutual agreement, the two bargaining teams scheduled more negotiation sessions for November (starting with November 4) and December. No preconditions for these meetings were discussed. The college team stated that completion of the joint discussion of the Local 1021’s contract proposal on November 4 would enable them to offer a number of counter-proposals to the union at the next scheduled meeting on November 11.

On November 3, the day before the scheduled bargaining session, the Local 1021 team notified the CCA team that they were cancelling the session, despite the objection of the college team. The Local 1021 team also stated that all further negotiation sessions for November and December were being cancelled indefinitely, until the CCA team brings counter-proposals.

On November 16, the college negotiating team transmitted a letter to Joel Schaffer, Commissioner of the United States Federal Mediation and Conciliation Service (FMCS). Commission Schaffer is the impartial federal government mediator whom the FMCS assigned back in January 2015 to assist, if needed, in the Local 1021-CCA labor negotiations. The college negotiating team requested that Commissioner Schaffer convene both negotiation teams for bargaining sessions and to assist them to get the negotiations on track.

FMCS Commission Schaffer informed both teams that he was available to convene a negotiation session on December 18 at the FMCS offices. Both teams have responded that they are available for and agreeable to this meeting. We’re looking forward to this mutually-agreed-upon plan to resume negotiations with the assistance of the federal mediator.

Read the FAQs about federal mediation.

The CCA negotiation team last provided a report on negotiation on September 23, 2015. A copy of that report can be found below.

By October 27, the two negotiating teams will have nearly completed their joint discussion of the Local 1021’s contract proposal that was first presented by the union at the August 19, 2015 meeting of the two teams.

The two negotiating teams have set up meetings for November and December, although a final schedule for all meetings has yet to be established. The agenda for the upcoming meetings will be set by mutual discussion of the two teams.

An FAQ about the union negotiations was published by CCA negotiation team last month; an updated version can be found on the website.

CCA offers studio-based professional degrees in multiple programs, and our students benefit from a diverse faculty comprised of both highly trained scholars and celebrated practitioners. Sustaining a faculty that balances continuity and flexibility is key to providing a learning environment that keeps pace with the rapidly changing world of contemporary creative practice.

The college strives to support all its faculty members in a way that enhances student learning, promotes academic excellence, and also sustains the financial health of the institution.

During the weeks since August 13, 2015, the CCA negotiation team has worked directly with the Local 1021 team to establish a regular meeting schedule; to review Local 1021’s ideas in detail; and most importantly to begin to learn how Local 1021’s counter-proposals to CCA’s long-established practices of recruitment, hiring, evaluation, and retention of faculty could be operationalized without overburdening program chairs, staff members, and college resources.

What follows is a summary of the key elements of Local 1021’s contract proposals at this stage.

Unranked Faculty Salaries: Local 1021 proposes that pay for all courses taught by unranked faculty effectively doubles. In addition, Local 1021 proposes 50 percent or more pay premiums on top of the line rate for many kinds of courses and substantial payments for “service.”

Aggregate pay for unranked faculty would be in the same range as ranked faculty, but without commensurate responsibility or service obligations and without meeting the professional practice standards of ranked faculty expected through searches and evaluations for promotion and reappointment.

Course Assignment: Local 1021 has designed and proposed a system of seniority for course assignment at CCA; this system would impact hiring of all unranked faculty and also limit the college’s ability to create new ranked positions. Under this proposal, program chairs must assign courses based on seniority as the primary criteria, as opposed to other criteria that promote educational diversity and excellence.

Local 1021 wants the power to dictate faculty hiring decisions, making the union seniority rules the primary driver for who teaches what courses to CCA students.

Faculty Evaluation and Assessment: Local 1021 proposes that unranked faculty must not be removed despite teaching performance or behaviors deemed unsuccessful by students and faculty peers; instead, program chairs must coach them in a performance improvement plan (PIP) for at least one year.

The unionized unranked faculty members would then possess a large voting majority in the Senate. In addition, the contract proposal states that Faculty Senate committees should be composed of no less than 50 percent unranked faculty.

Diversity of People and Educational Experience: Local 1021’s proposal does not allow the college to continue its current efforts nor introduce new initiatives aimed at increasing the diversity of CCA’s unranked faculty members and pedagogies. CCA’s bargaining team has been informed that Local 1021 may be open to consider these issues, but Local 1021 has not made diversity central to its hiring, course assignment, and retention proposals.

Diversity is and remains a key strategic priority for the college.

Mandatory Union Dues: The union proposes that all unranked faculty must pay 1.7 percent of their earnings to the union in order to continue employment. 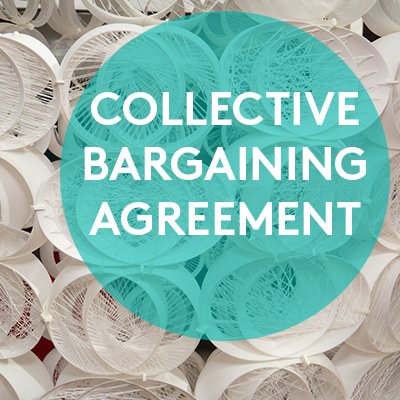