Bret Recor and Merric French: Sharing how to Challenge the World to be Better 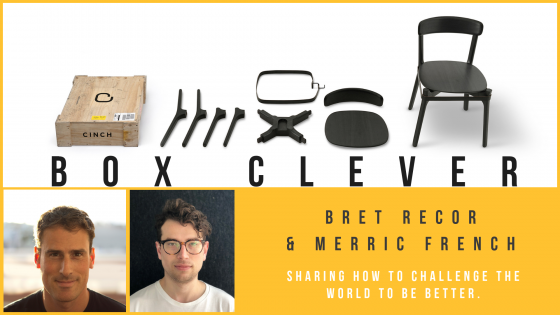 Bret Recor and Merric French of Box Clever share the story about the creation of the Cinch and insights into the studio's unique design approach which led to the creation of their new chair. This will be a hands-on evening with some assembly encouraged and enjoyed.

Challenge the world to be better.

An expert in bringing designs from concept to market, Bret is committed to

executing a creative vision to its most brilliant realization within the

existing constraints. To do this, he balances the creative vision with

branding. Bret has applied his expertise to the launches of several

high-profile products and initiatives, including the One Laptop Per Child,

Nebia, Away, and most recently HiLo for Knoll. Bret has also launched a

task light. Prior to founding Box Clever and Fadestudio, Bret was a design

director at fuseproject. Bret has worked with clients ranging from consumer

goods giants to government agencies, among them, Tiffany & Co., Johnson &

work has earned several awards around the world including, Index, Spark,

IDEA, iF, Clio, D&AD, FX, Spark, Red Dot. His work is part of the permanent

collections of NY MoMA, SFMOMA, the Art Institute of Chicago, and the Centre

both functional and beautiful. Coming from a family of artists, designers and

makers, Merric has a background imbued in creativity and has extensive

experience with furniture design and production. Originally from Australia,

multiple ubterbatuibak designs awards including those from D&AD, IF and the