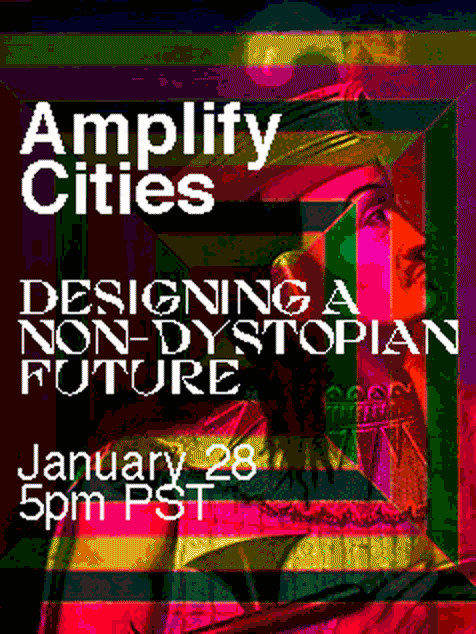 In a time and state of flux, please join us Jan 28 for a discussion on building more inclusive, more visionary, and more radical forms of urban space and institutions. Amplify Cities, a global speculative think-tank, will be discussing the reimagination of cities and policies for a non-dystopian future. This event is free and open to the public. Instagram:  @ccadesignfutures #amplifycities #amplifypolicy
amplifycities.org

Tunde Onikoyi teaches African Cinema/Screen Media and Postcolonial Studies in Department of Languages and Literary Studies, Adeleke University, Ede, Osun State Nigeria, and had earlier taught in Kwara State University and Elizade University. He was appointed Member of Jury, for the African International Film Festival in 2018. He is a prodigious scholar, with several publications in book chapters and journals including, Journal of Pan African Studies, Black Camera, African Theatre, African Studies Review, Journal of African Cinemas and Journal Media Communication Research. He is currently working on book project on African Literatures for Movies.
Alfonso F. Ramos, Esq. has spent decades representing indigenous people for Central and South America migrating to the United States. He is a member American Immigration Lawyers Assn. and graduate of Georgetown University School of Foreign Service (BSFS), Rutgers Law School (JD), New York University School of Law ( LLM, International Legal Studies) his extensive contribution and dedication to the immigrant community in New York City has been acknowledged by Proclamation of the New York City Council.

William Rockwell is a practicing architect, living, and working in the Lower East Side. He has worked in New York for 30 years on a variety of preservation, renovation and
public event projects with the Art Production Fund, the Museum of the Moving Image, the New Museum, PS122 and the Architectural League as well as private residential and
commercial clients. He is a founding member of the Grand Street Democrats that has deepened the engagement and conversation with the neighborhood community, its elected officials and City agencies—especially in relation to the East Side Coastal Resiliency Project poised to dramatically alter and improve storm protection from lower Manhattan to Midtown. He received a Bachelor’s of Architecture from Virginia Tech and a MAAD from the GSAPP Columbia University.

Stephen Zacks is an advocacy journalist and organizer based in New York City. A graduate of Michigan State University and New School for Social Research with a bachelor’s degree in interdisciplinary humanities and a master’s in liberal studies, he publishes regularly in Dwell, Oculus, Architect’s Newspaper, Abitare, L’Architecture d’Aujourd’hui, Brownstoner, and Metropolis, where he previously served as an editor. As a journalist, founder of Flint Public Art Project, and president of Amplifier Inc., a non-governmental organization that employs emerging ideas, media, and design to promote institutional, political, and economic transformation, he has consistently advanced critical discourse, interrogated systems, advocated for justice, promoted regenerative design, and helped reimagine places. He has received awards from ArtPlace, Creative Capital, Graham Foundation, MacDowell, National Endowment for the Arts, New York State Council on the Arts, and Warhol Foundation.

Located at the center of innovation and technology in the San Francisco Bay Area, California College of the Arts is home to a world-renowned faculty of practicing artists and entrepreneurs, and a diverse community of makers that are boldly reimagining the world. Offering 22 undergraduate and 11 graduate programs in fine arts, architecture, design, and writing, CCA’s creative culture is built around the ideals of interdisciplinary collaboration, sustainability, and community engagement.

California College of the Arts campuses are located in Huichin and Yelamu, also known as Oakland and San Francisco, respectively, on the unceded territories of Chochenyo and Ramaytush Ohlone peoples, who have continuously lived upon this land since time immemorial. We recognize the historic discrimination and violence inflicted upon Indigenous peoples in California and the Americas, including their forced removal from ancestral lands, and the deliberate and systematic destruction of their communities and culture. CCA honors Indigenous peoples—past, present, and future—here and around the world, and we wish to pay respect to local elders, including those of the lands from which you are joining us virtually today. If you are unsure of who's land you are currently residing upon, we encourage you to visit native-land.ca.

Please RSVP to the Eventbrite link for webinar access