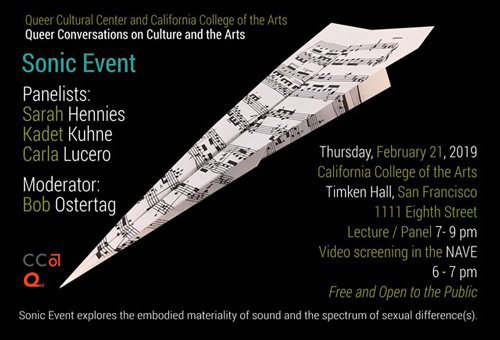 Co-sponsored by QCCA: Queer Conversations on Culture & the Arts

Sonic Event explores the embodied materiality of sound and the spectrum of sexual difference(s) in the work of three contemporary artists crafting the divergent velocities of sonic experience.

From the “female voice” showcased in the operatic works of Carla Lucero, to Sarah Hennies' percussive explorations of gendered sound and the immersive physicality of Kadet Kuhne’s videos and sound engravings, the evening affords a listening experience that manifests the multiplicity of human and non-human material presence.

Carla Lucero
Carla Lucero is originally from Los Angeles, graduating from CalArts in 1986, where she studied with Rand Steiger, Morton Subotnick and the late, legendary film composer, Leonard Rosenman. In LA, she spent 5 years as a composer in residence at Collage Dance Theater. Carla's love of opera and classical music drew her to San Francisco, where her first opera, "Wuornos" was produced and then premiered at Yerba Buena Center for the Arts. Her second opera, "Juana" will premiere at UCLA as a capstone project to commemorate the University’s Centennial in November 2019. In 2015, Lucero was commissioned by Earplay to write a chamber work, "Castillo Interior: Interior Castle," for Male Soprano, Bass Clarinet and Piano, to commemorate their 30th anniversary. She is currently in the early development stages of her third opera, “touch,” based on the life and love affair of Helen Keller. An excerpt from the opera was produced and performed by West Edge Opera in 2016.
In the last 20 years, Carla has had her operas, chamber, symphonic and piano/vocal work performed in New York, Los Angeles, San Francisco, Mexico City, Madrid, Havana, Santiago, and Alberta, among other cities in the US and around the world. Carla is the US Director of ComuArte International, an international arts organization. She is also on the faculty of Academy of Art University, teaching composition and orchestration in the Music for Visual Media Department. Carla Lucero has received awards and commissions from San Francisco Arts Commission, la Festival Contemporania de Habana (Contemporary Music Festival of Havana, Cuba), California Arts Council, Creative Work Fund, the Zellerbach Foundation, the Getty Foundation, Meet the Composer, Charles Schwab, Wells Fargo, OUT Magazine, the Advocate, ComuArte, International, Theater Bay Area, the Mexico City Philharmonic, Earplay, West Edge Opera, Orquesta del Instituto Politécnico, and many others.

Sarah Hennies
Sarah Hennies (b. 1979, Louisville, KY) is a composer and percussionist based in Ithaca, NY. Her work utilizes an often grueling, endurance-based performance practice in a subversive examination of psychoacoustics, queer identity, and performance art. She has presented her work in a variety of contexts including Café Oto (London), cave12 (Geneva), Ende Tymes (NYC), Festival Cable (Nantes), the Johns Hopkins Digital Media Center, O’ Art Space (Milan), and Second Edition (Stockholm) and has received commissions for new work from Cristian Alvear, Bearthoven, Bent Frequency, R. Andrew Lee, LIMINAR, Qubit Music, and the Thin Edge New Music Collective. Her work has been supported by the Foundation for Contemporary Arts, New Music USA, New York State Council on the Arts, and in 2016 was awarded a fellowship in music/sound from the New York Foundation for the Arts.

Hennies is currently a member of improvised music group Meridian with Greg Stuart and Tim Feeney, a duo with sound/performance artist Jason Zeh, and the Queer Percussion Research Group with Jerry Pergolesi, Bill Solomon, and Jennifer Torrence. In late 2017 she premiered the groundbreaking work, Contralto at Issue Project Room (NYC), a film featuring a cast of transgender women with a live score for string quartet and three percussionists.

Kadet Kuhne
Kadet Kuhne is a visual and sound artist who generates synthetic stimuli as an investigation of subjectivity through systems of control and technological mediation. With a preoccupation of what constitutes consciousness, Kadet aims to prompt visceral, even pre-verbal emotional and physical responses to the invisible forces of particles and vibration that construct all matter. Taking form in video, installation, album releases, performance, interactivity, 3D printing and 2D print, Kadet’s works have been presented nationally and internationally at select venues such as the Museum of Art Lucerne, de Young Museum, Museum of Contemporary Art Los Angeles, Contemporary Art Center Villa Arson, Antimatter Film Festival, San Francisco Arts Commission Gallery, LACE Gallery, Crossroads Film Festival and Highways Performance Space and Gallery. Kadet received a Masters in Integrated Media and Music Composition in Experimental Practices from the California institute of the Arts in 2004. Based in Oakland, CA, Kadet has collaborated with Bay Area artists Mary Franck, Suki O’Kane, Paul Clipson and Gregory Dawson, and has remotely developed projects with Alba G. Corral, mem1 and Krystof Pesek.

As a journalist, his writings on contemporary politics have been published in many languages. Electronic instruments of his own design are at the cutting edge of both music and video performance technology.

Born in Albuquerque in 1957, he dropped out of the Oberlin Conservatory after two years, settled in New York City in 1978 and immersed himself in the “downtown” music scene of the period. He left music in 1980/81 to work in Central America, and became an expert on the region, with writings published in Asia, Africa, Latin America, Europe, and the U.S. In 1988 he moved to San Francisco and resumed his musical activity. His radically diverse collaborators have included the Kronos Quartet, avant garders John Zorn and Fred Frith, heavy metal star Mike Patton, jazz great Anthony Braxton, dyke punk rocker Lynn Breedlove, drag diva Justin Bond, film maker Pierre Hébert, and others. He is rumored to have connections to the shadowy media guerrilla group The Yes Men.